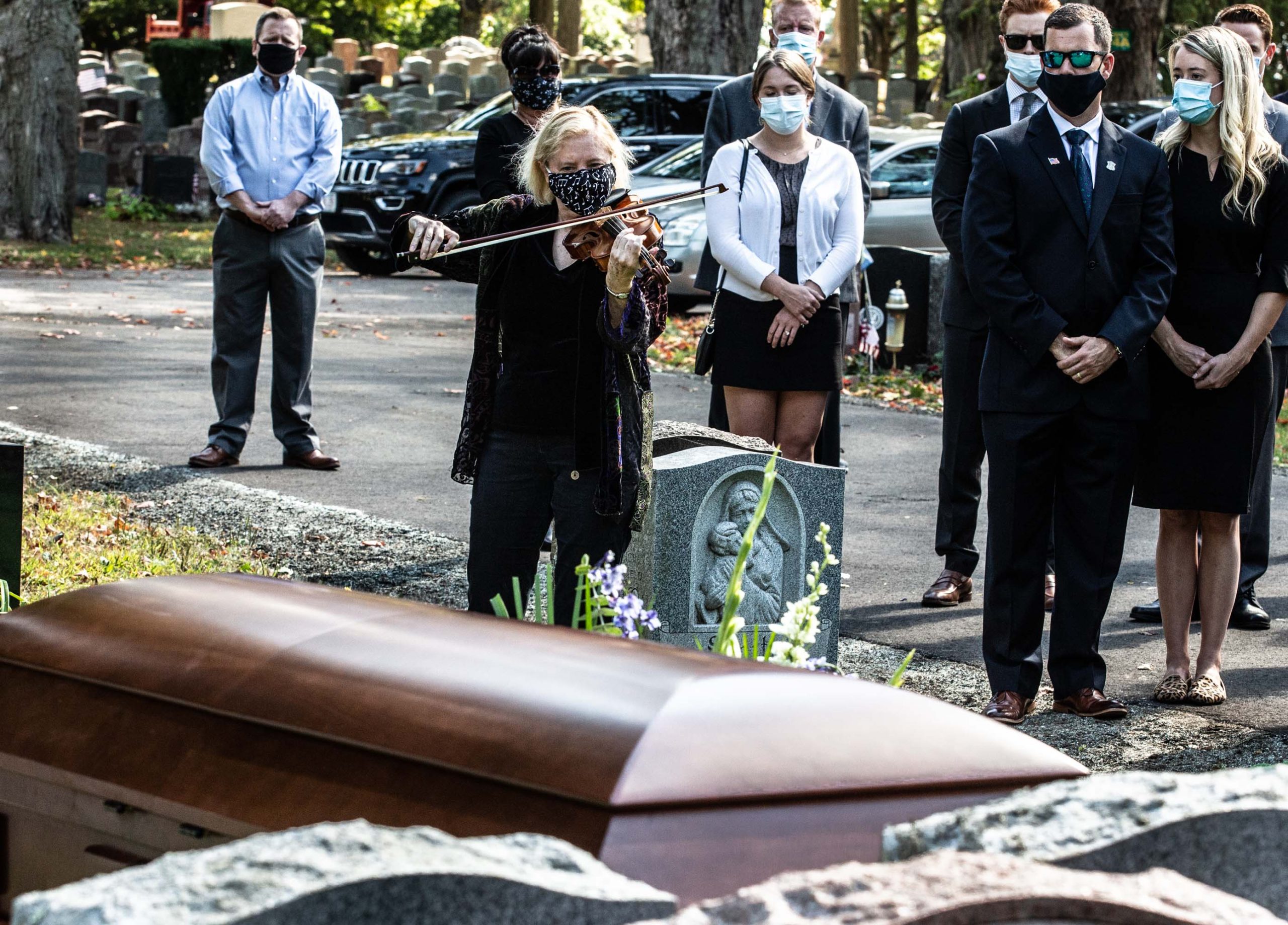 DORCHESTER – Despite the restrictions on gatherings, the funeral for former Boston Police Deputy Superintendent Ed Walsh drew a number of people who felt compelled to pay their respects to a man who touched a lot of lives throughout the city.

The restrictions because of Covid-19 meant that only Mr. Walsh’s immediate family could be inside St. Brendan’s Church, where he was a parishioner for a number of years and tended the flowers outside for more than 25 years. (The father of eight, Mr. Walsh was also the grandfather of 21 and great-grandfather of 24.)

It was outside where the Boston Police Gaelic Column of Pipes and Drums played in honor of Mr. Walsh as his casket was brought outside the church by a phalanx of his grandchildren and great-grandchildren, some of whom served as pallbearers.

The story of Eddie Walsh’s life cannot be told without a few good stories from his days as a member of the Boston Police Department. And while there are many (many, many) to choose from, one stands out and came into play at Thursday’s funeral services for Mr. Walsh.

At Cedar Grove Cemetery, where Mr. Walsh was laid to rest next to, Dot, his beloved wife of many years, Boston resident Annette Emerson came to play “Danny Boy” on a violin that had been stolen from her North End apartment in 1981 only to be returned to her by Mr. Walsh. And, of course, the violin came with a story or two about the man who had stolen it, and the legend grew over the years.

“My little apartment at 19 Charter Street in the North End was broken into and they took my Fisher stereo, a little TV, and my violin…that I had given as a graduation present” a few years earlier, Emerson said. Her father worked with her to try and track down local violin shops, of which there were many in 1980s Boston, but the case came across the desk of Ed Walsh.

Emerson, who then worked at Goodspeed’s Book Shop, got a call from Mr. Walsh, who had managed to track down the violin. “I never really got the whole story,” said Emerson, who was told that Walsh put the word out that the violin could be returned and things would go “better” for the thief. Some years later Mr. Walsh told Emerson that the thief was later sent to prison for a host of crimes.

The story, at least as told by Mr. Walsh, continued to grow. “When Eddie retired, John Henning did a piece on the news and at that point my violin was a Stradivarius,” said Emerson, noting the best violins ever made. “It is a nice instrument, but not that caliber.”

She played “Danny Boy” as a nod to Mr. Walsh’s Irish heritage and noted that she reconnected with Mr. Walsh a few years ago, after he had moved to Connecticut to live with his daughter Kathleen. Mr. Walsh showed Emerson his photograph with his son, Ed, and two grandsons, all members of the Boston Police Department, in Bill Brett’s fifth book, “Boston: Irish.”

“I carried Eddie’s card in my wallet for years. I always thought that if something bad happened, that would be all the safety I needed,” Emerson said.

Edward J. Walsh was born in South Boston where he was a star football player at South Boston High School. In World War II, Mr. Walsh served in the U.S. Navy in the South Pacific on the USS Bataan for four years. He returned to South Boston in 1945 to marry his beloved Dorothy Kinsella, who lived 47 steps from his house on 2nd Street.

It is said that when Mr. Walsh joined the Boston Police Department in 1955, he found his true calling. Awarded two gold medals in less than a year and a half, Mr. Walsh was soon promoted to detective. According to his obituary: “Blessed with a photographic memory and a small army of contacts, he joined the Organized Crime Squad and was ultimately promoted to Deputy Superintendent. He received multiple commendations from the State Police and FBI.”

When he retired, the Boston Globe carried a frontpage story that called him the “quintessential street cop.” Henning, then of WCVB-TV, called Mr. Walsh a “legend on the streets” and Boston Police Commissioner Francis Roache labeled him as “one of the most talented and dedicated police officers in the history of the Boston Police Department.”

For those who knew him best, however, “the true legend of Eddie Walsh was as a husband, father, grandfather, and great-grandfather. He was always there to help someone in need. On retirement, he kept his grandchildren busy selling baseball cards at Fenway Park and at Shamrock Baseball Cards in Harwichport. His grandchildren could also count on boat rides at the Cape, a card and check on birthdays, and a deposit in the ‘big bank’ for helping out with the cards. When his adored Dot developed cancer, he gave her remarkable care and devotion for 10 years.”

ALL PHOTOS BY BILL BRETT 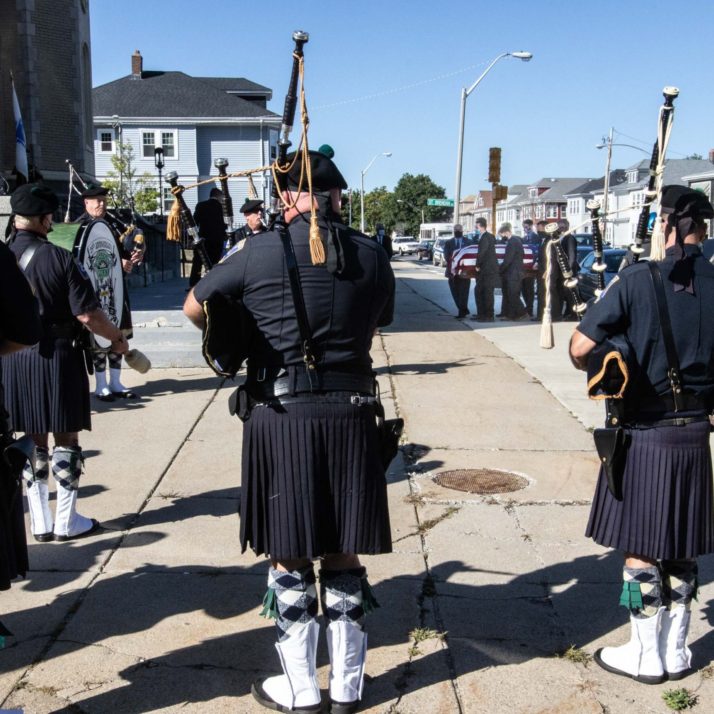 The Boston Police Gaelic Column of Pipes and Drums outside St. Brendan’s Church in Dorchester. 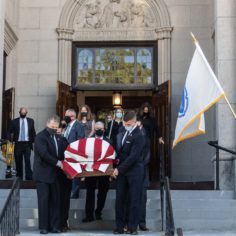 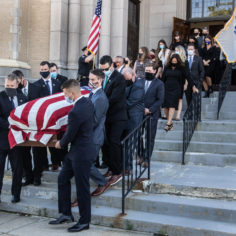 The family of former BPD Deputy Superintendent Ed Walsh walks with his casket out of St. Brendan’s Church. 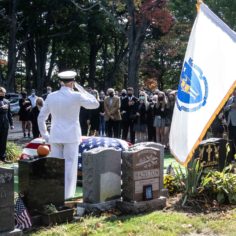 The US Navy paid tribute to Mr. Walsh, who served in World War II. 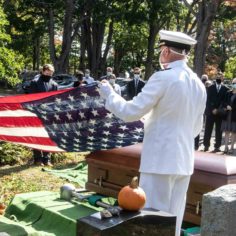 The US Navy folds the flag that draped Mr. Walsh’s casket. 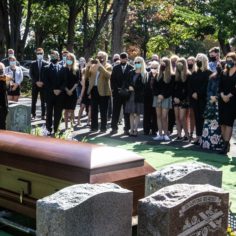 The family gathers at Cedar Grove Cemetery in Dorchester. 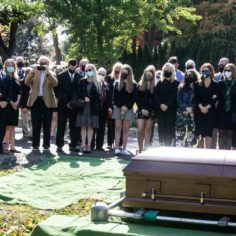 Mr. Walsh is laid to rest at Cedar Grove Cemetery. 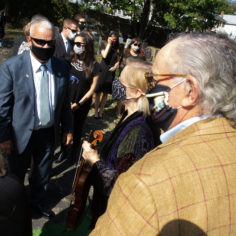 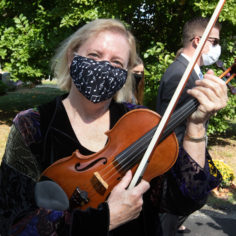 Annette Emerson with the violin that Ed Walsh recovered after a North End theft in 1981. 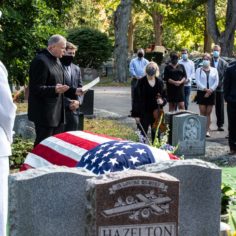 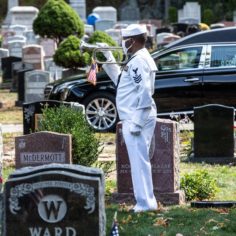 “Taps” is played at the cemetery. 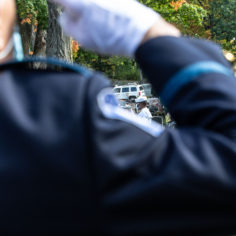 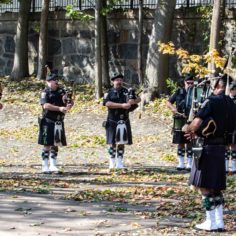 The Boston Police Gaelic column plays at the cemetery. Mr. Walsh’s son and grandson are members of the famed group. 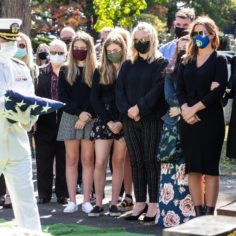 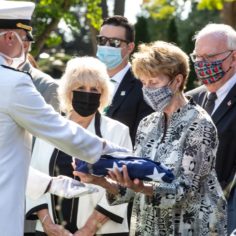 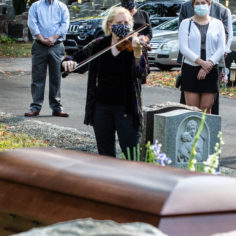 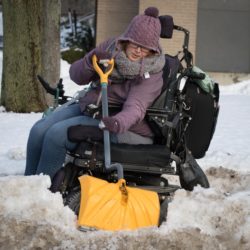 On Wednesday as the region shoveled out, some pitched in more than others 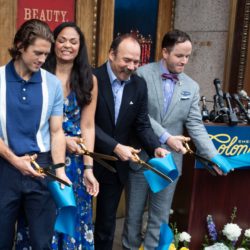 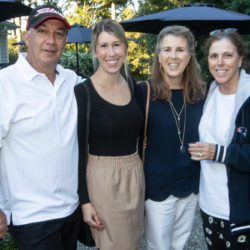 Bill Brett Boston
The tale of two gas pumps. Bill spotted gas for more than $4 in Boston and for less than (by a penny) $3 in Weymouth, where they pump your gas for you.
https://billbrettboston.com/fill-er-up-gas-prices-climb-and-vary-widely-depending-upon-location/
27 5 4    View on Facebook