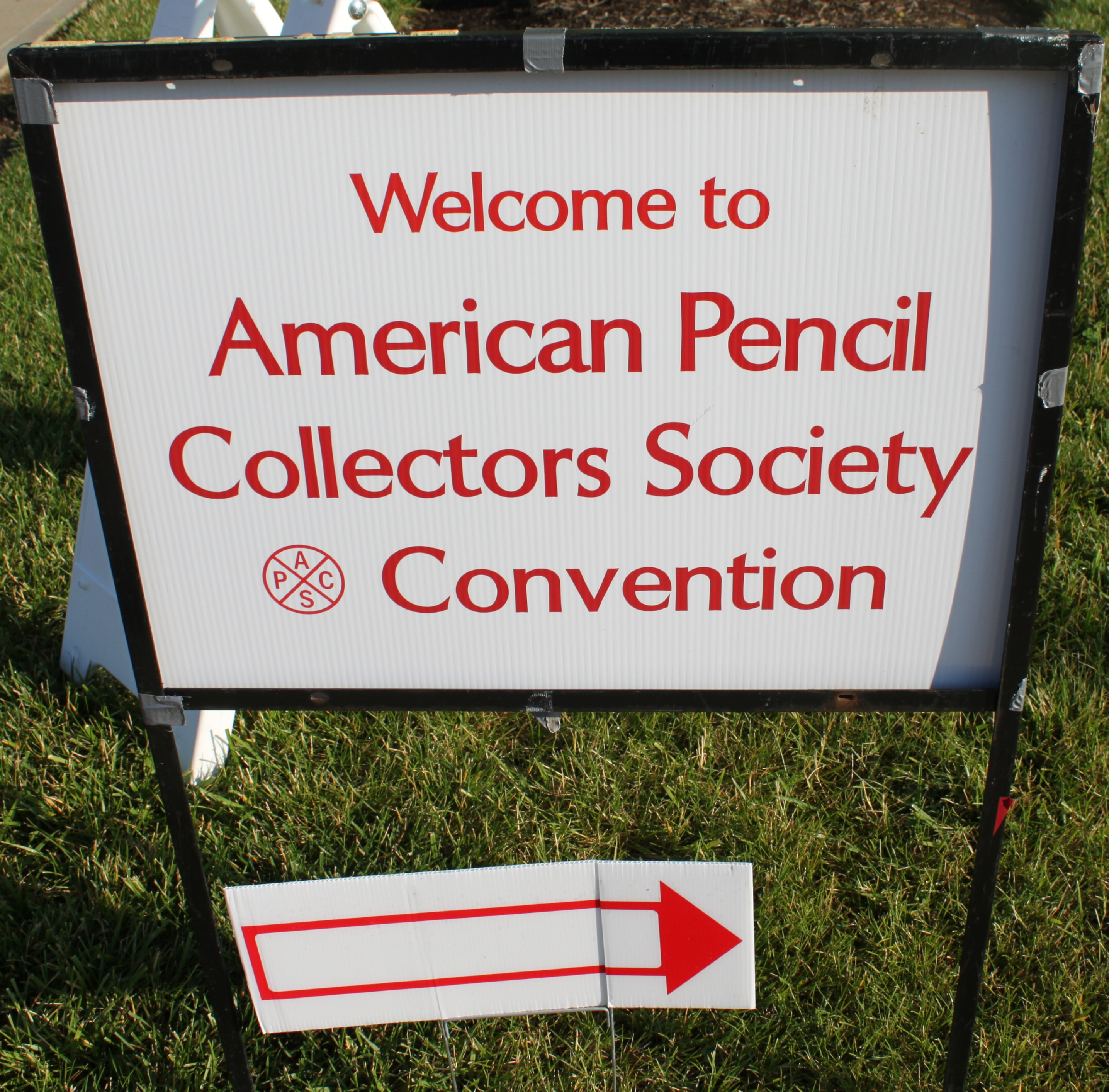 By Carol Beggy with reports from other members

ASHLAND, OH — Walking out of my hotel on the morning of the first day of the 2019 American Pencil Collectors Society convention, I was greeted by a flotilla of hot air balloons rising above the trees on the outer edge of Ashland University.

The 29th biennial gathering of the members of the APCS coincided with the annual Ashland BalloonFest, which fills the skies with colorful balloons and baskets from all over the country.

It was just a short distance up the road, on the campus of the university in this Ohio city that is located between Cleveland and Columbus where the members of the American Pencil Collectors Society gathered on June 28 and 29, 2019, for all things pencil-related. That included a bunch of trading, members bringing things they had picked up for other members, and catching up with each other – and that was just in the first hour.

Convention host Kent Murray had been planning since the 28th convention hosted by Ron Brink, APCS president, in Sioux City, IA in 2017.

“I wanted to make sure that the members had a great experience,” Kent said as he passed out the goodie bags and welcome packets as the convention got rolling. “There are so many interests within our within our group. It is always interesting to see how our conventions play out. It is always a fun couple of days.”

Walking into the ballroom at the John C. Myers Convocation Center it was all smiles as members caught up with one another while they unpacked and set up their tables and put out their wares and displays.
Making my second trip into the ballroom, I spotted Jerome Lobner, who I met in Iowa, my first convention. He and I have kept in touch and I appreciate all that he has taught about pens as well as pencils and the APCS history.

The traffic from Jonathan’s table on one side of mine to Bill Bean’s on the other side was impressive as Bill had brought a sizable part of his collection of mechanical pencils to help slim down his holdings in preparation for a move. Jonathan found a few gems as well as member Hans Van Loon, who sorted through the boxes of Bill’s well-organized collection.

Also nearby was APCS Secretary /Treasurer Aaron Bartholmey who not only brought items from his collection, but most of the vintage advertising pencils from Ron Brink, our president who died in January. A bittersweet experience for all of us was sorting through the items in hopes of adding something from Ron’s collection to our own.

On a personal note, I first met Ron on the phone when I wrote about attending the 2017 APCS convention, which he and his wife, Beverly, hosted in Iowa. Among the many tidbits Ron gave me was that for conventions, he never brought his actual “collection” but parts that he wanted to trade or sell. Great advice, but I always seem to pick up more than I trade or sell away.

Aaron was joined at the convention by his wife, Allison, and they even went on their honeymoon from Ashland.

Traveling is part of the experience for our APCS conventions, it seems, and Paul Mikula, who traveled with his wife, from Florida. Paul is known for his collection of telephone dialer pencils and also for teaching the rest of us about them. He found items and had several on display, shown here.

You could get lost in each corner of the ballroom. Near Paul, newly elected vice president Jeff Hoffman had a couple of tables of treasures with Ron Toot holding court nearby, along with Jerome Lobner, Phil Pfeiffer, and then there were a few tables that could take hours to sort through.

Judy and Andy Stoops brought their cousin Helen Ferguson’s collection. If you made it through those treasurers – I’ll admit to making several trips and elbowing out a few others – then you had former The Pencil Collector editor and publisher Doug Martin’s table, which is a must-stop for those of us who collect brand name pencils. Doug and his wife, Miriam, live in Ohio, so they also served as tour guides with sightseeing recommendations for those of us from outside the area.

I first met Charles and Bonnie Breisch at the 2017 convention and their table proved once again to be a great place for a collector like me to learn. Charles had a display of vintage advertising pencil clips.

With lunch and dinner breaks at Ashland University’s cafeteria, attendees could get some rest before combing through the tables of former APCS president John Horsting, who brought a range of wood-case ad pencils, including many “left-handed” pencils, and yes, there really are left-handed pencils. Just ask John or Bill Bean.

I had to stop by the table of Joyce Thomas to talk about a number of things, but most of all to get some insight into “member pencils,” which Joyce has collected over the years.

Member Karyn Schmitz’s table was a convenient stop for members of the public who came into the convention area and she helped get them started on their pencil adventures.

No one got into the convention, however, without stopping at Kent Murray’s set-up where he served as the event’s host, emcee, and prize distributor.

Others attending the 2019 outing included Peter Hoffmann, who traveled from New York with his parents, Harriet and Peter, fellow New Yorker Jillian Neubauer, and Nancy Peltier, who came from nearby Akron. 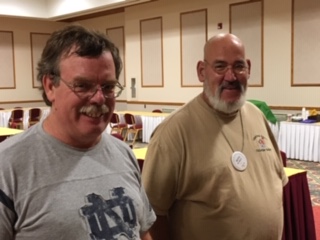 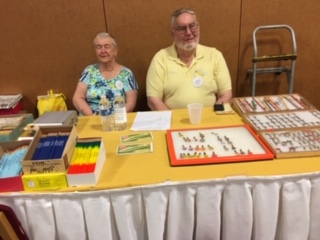 Bonnie and Charles Breisch at their table at the APCS convention on June 28 and 29, 2019 in Ashland, OH. Photo by Phil Pfeiffer 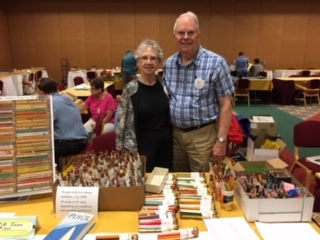 Winnie and Bill Bean at their table at the APCS convention. Photo by Phil Pfeiffer 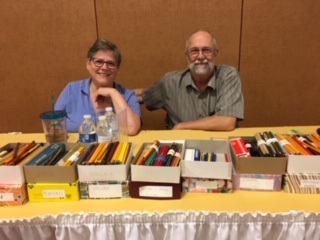 Miriam and Doug Martin at their table at the APCS convention in 2019. Photo by Phil Pfeiffer 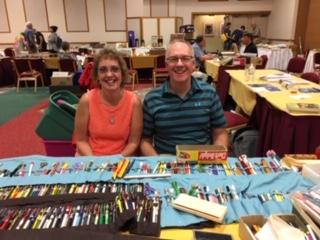 Judy and Andy Stoops, cousins of late APCS member Helen R. Ferguson. The Stoops traveled from West Sunbury, PA, to Ashland, OH, to sell off Helen's collection to members and others. The Stoops also made a donation to the APCS in Helen's name. Photo by Phil Pfeiffer 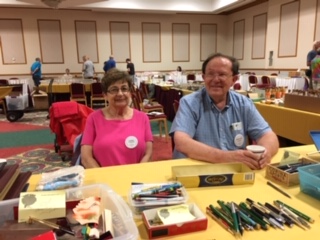 Linda and Jerome Lobner, who traveled from Nebraska for the convention, hang out at their table, where a lot of attendees stopped by to discuss pencils, pens, mechanical pencils, pens, woodcase pencils, and pens. Photo by Phil Pfeiffer. 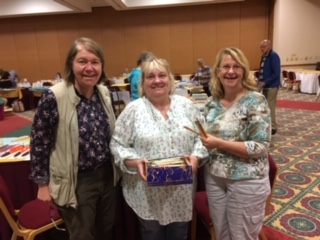 Newly elected APCS Editor Carol Beggy, left, with her sisters, Pat and Terry, who traveled with Carol to attend the convention. Photo by Phil Pfeiffer. 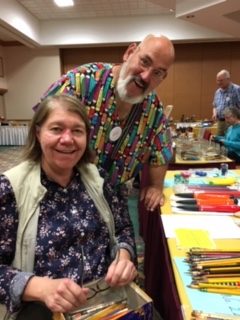 APCS convention host Kent Murray, with APCS Editor Carol Beggy at Carol's table. Kent was a roving prize man at the convention giving away T-shirts, backpacks, and other items. Photo by Phil Pfeiffer 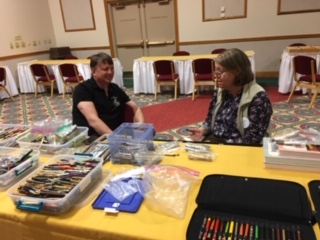 Jonathan Veley, a past member who re-upped his membership to attend the 29th biennial convention, talks with Carol Beggy, the new editor of The Pencil Collector. Photo by Phil Pfeiffer 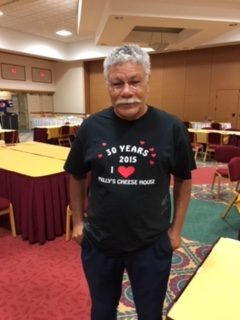 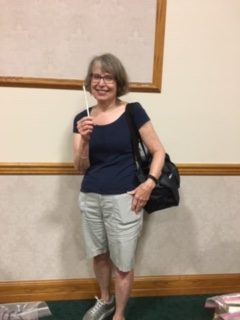 APCS member Nancy Peltier, who shows off that she brought some of her member pencils for trading. Photo by Phil Pfeiffer 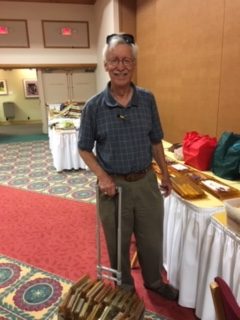 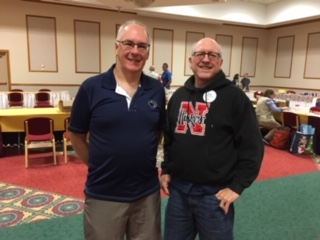 A Nebraska Cornhusker fan and a Penn State Nittany Lion fan relive some football rivalry moments at the APCS convention. (We're not sure who took this photo since Phil's IN it.) 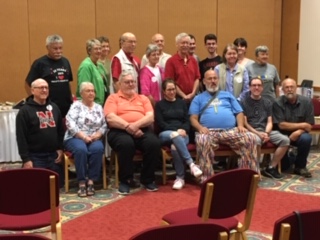 Phil popped this version of the group photo just before jumping in. Photo by Phil Pfeiffer 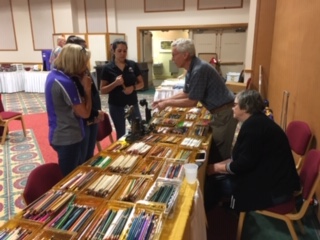 Paul Mikula explains to some visitors at the convention that his collection includes a number of phone dialer pencils. Photo by Phil Pfeiffer 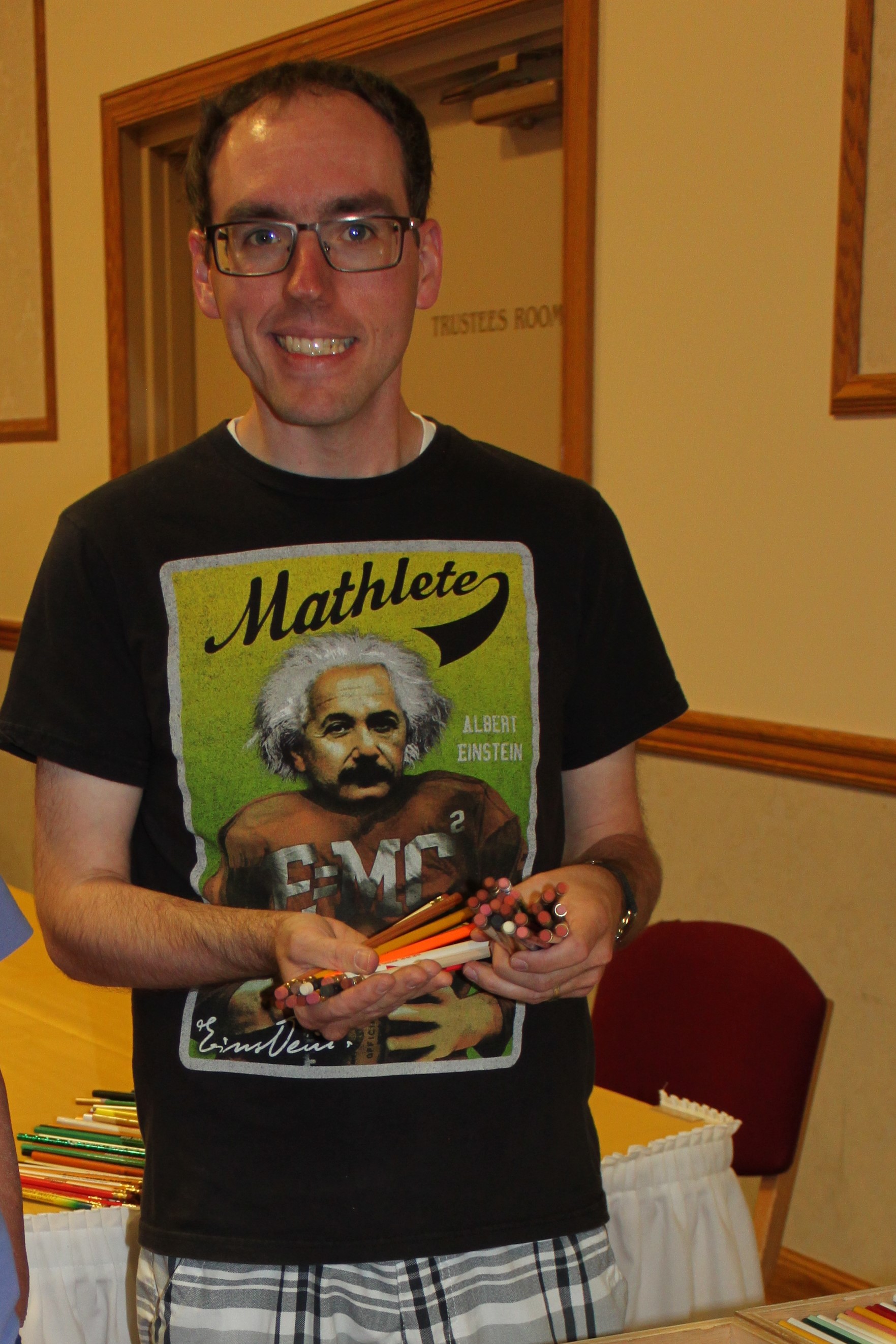 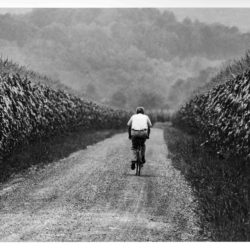 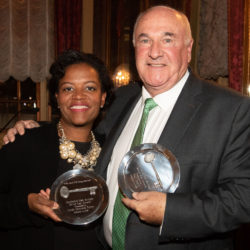 Paul Doyle pens a poem about World War I, the “Great War”

May I take your order? – Bill Brett
EAST WEYMOUTH — This was Bill’s view on May 28, 2020 at the Dunkin’ (Donuts) in East Weymouth. Since it’s drive-through only, you never know what to expect, but this caught Bill by surprise.
billbrettboston.com
144 13    View on Facebook